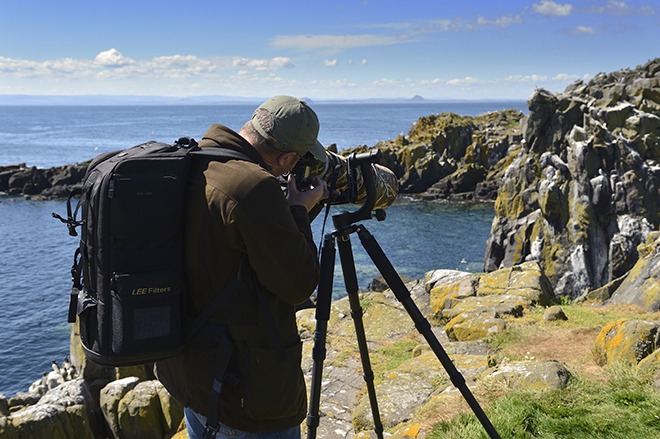 Image above: Photographers on the Isle of May National Nature Reserve © SNH / Lorne Gill

Scottish wildlife crime officer Charles Everitt recently shared his thoughts with Scottish Natural Heritage on the importance of staying within the law when photographing animals in their natural environment. As something all wildlife enthusiasts should be aware of, we’ve included his article below. At the end of the piece you’ll find OP contributor and wildlife photographer Laurie Campbell’s response on the subject.

Wildlife photography: could you be breaking the law?

Do you know the laws about photographing wildlife? Recent allegations of photographers disturbing otters, capercaillie, osprey and seals around Scotland during the last 12 months have raised quite a bit of interest in this topic.

While police investigation still continues into these incidents – three of which occurred in the spring and summer of 2015 – the desire to take a picture at an animal’s expense is the root cause and is a timely reminder that much of Scotland’s, and the rest of the UK’s, flora and fauna is protected by law. This often means that licences are required to protect wildlife photographers from committing offences. The Partnership for Action Against Wildlife Crime (PAW) Scotland is concerned that ignorance of the regulations is putting animals at risk and photographers in danger of attracting fines and criminal records.

Many photographers from around the UK visit Scotland to photograph its more rare wildlife. While wider causes of animal disturbance remain a concern, it’s important that the recent upsurge in wildlife photography doesn’t contribute to greater numbers of incidents. Detailed guidance on wildlife photography and licensing in Scotland can be found on Scottish Natural Heritage’s website here and similiar information for England and Wales can be found here.

While no offence is committed if an animal remains undisturbed, the majority of photographers have no control over how that animal may react – therefore, they risk committing offences. Photographers can apply for a licence from Scottish Natural Heritage or Natural England to provide permission to disturb the animal for the purposes of photography but, understandably, licences are site specific and granted only to photographers who can display a level of competence.

Photographic licences protect vulnerable species from disturbance that could affect their welfare or breeding success and are only granted to photographers who can clearly demonstrate that they have the appropriate skills, knowledge and experience. Photographers may be asked to submit a small portfolio of their wildlife images which can be built up by photographing common, accessible species such as garden birds and water fowl, grey squirrels, hedgehogs, foxes and insects that can be found in local parks, woodland and gardens.

OP contributor and wildlife photographer Laurie Campbell says: ‘I think that the main cause of the problems we are beginning to see in wildlife photography is that as more people become involved in photographing nature, a lower percentage of them have as much an understanding about the biology and behaviour of the subjects they want to photograph than was once the case. I also sense that it has become much more competitive now with many photographers rushing things, all leading to a pressure to obtain images at any cost.’

The Royal Photographic Society’s The Nature Photographers’ Code of Practice may also be useful reading for wildlife photographers. Click here to read more.