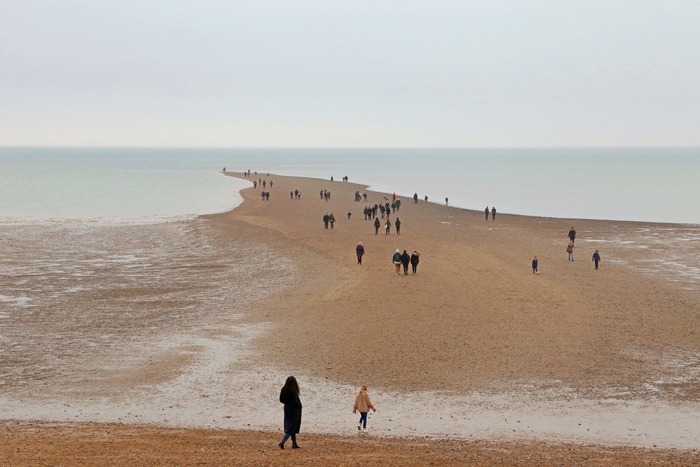 Beyond the Reach of Rivers is a photography exhibition by Mandy Williams that brings together work from two photographic series about the sea to the beachfront in Brighton.

Sea Level is shot in the Sussex town where she lived as a teenager and focuses on the beach shelters that line the promenade – a place to congregate and watch the sea. The photographs are taken at high tide, when the shelters are empty. Their windows are weathered and dusty and scratched by the wind. Absent of people, their presence lingers through traces of graffiti, dirt and other debris. The view of the sea through this prism produces images that are often quite abstract – the sea and the markings on the glass have equal importance in the finished photograph. Dust and neglect becomes part of the image, reinforcing the sense of melancholy which runs through many seaside towns. 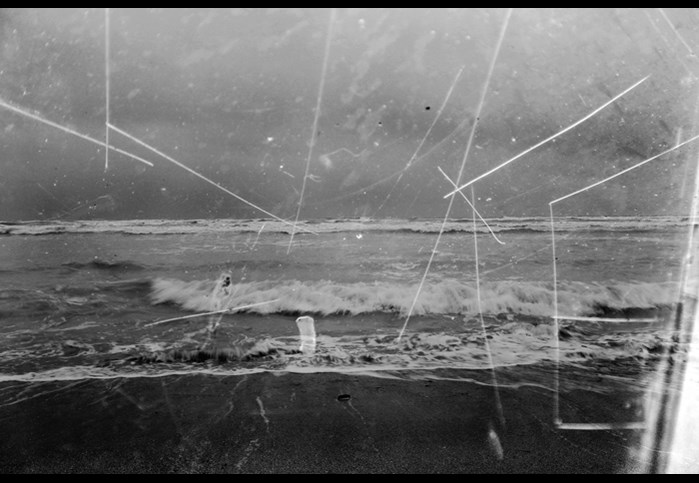 In Beyond Land the photographs take place at the street, a causeway that reveals itself at low tide, stretching out towards the horizon like an umbilical cord connecting us to the sea. Started a month after the referendum result with its emphasis on Britain as an island nation, geographically and psychologically separate from Europe, the photographs show a collective march to the water’s edge. The line of people following disappearing paths out to sea not only documents our innate connection to water but can also be seen as a metaphor for the times. 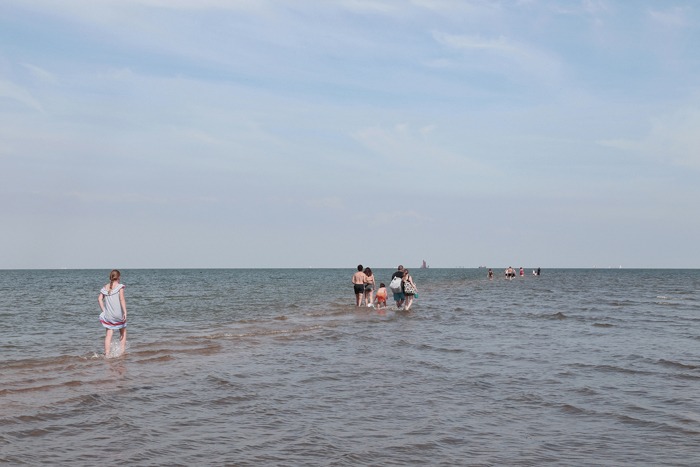 Mandy Williams is a photographer and artist who works on long-form landscape series concerned with the psychology of place and how the marks of time and human presence affect the environment. Often her photographs show a place that has been compromised – either by environmental factors or by its connection to a specific narrative.

Beyond the Reach of Rivers is her 3rd solo exhibition in the UK. Recent group exhibitions include the 209 Women exhibition at the Houses of Parliament (2018) and Open Eye Gallery, Liverpool (2019), and The Family of No Man, Cosmos, Arles (2018). She received the Photography prize at the Royal West of England Academy in 2014, 3rd place in the International Photographer of the Year Award 2017 in Landscapes: Seascapes, and work from Sea Level was shortlisted for the 2018 Hariban Award, and was an Awardee in the Julia Margaret Cameron Awards 2018.

*The title of the exhibition is taken from Loren Eiseley, an anthropologist and natural science writer whose writings frequently reference our evolutionary connection to the sea.

Beyond the Reach of Rivers
Fishing Quarter Gallery, Brighton
Wednesday 1 May – Monday 6 May 2019 Open daily 11am – 5pm