Over the Bar, from the series for ‘Six Hour Place’. Hand-printed C-type print.

Atlas Gallery is delighted to announce a collaboration with Suffolk’s renowned centre of music, Snape Maltings, in hosting the work of British landscape photographer Harry Cory Wright in the exhibition Place and Line. Cory Wright’s large photographic seascape, Over the Bar (2017), will be on display in the Dovecote Studio and a series of his drawings will be shown in the Concert Hall Gallery in the main Snape Maltings building. The exhibition coincides with the artist’s residency at Snape Maltings this summer, which will result in an exhibition of new works next year. During this year’s exhibition, Cory Wright will be asking visitors to suggest locations along the Suffolk coast as inspiration for new work. 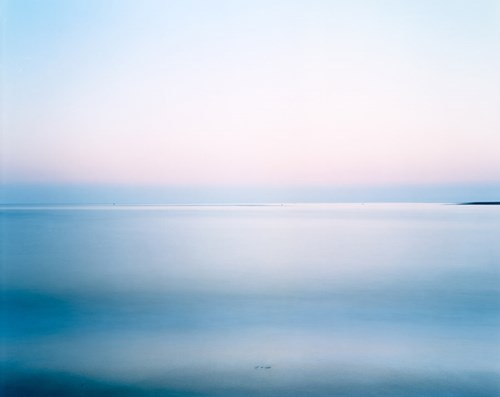 Cory Wright’s series ‘Six Hour Place’, is a collection of colour photographs taken in the tidal salt marshes of the north Norfolk coast. The photographs were made over a period of six hours, the average time that land is exposed by one retreating tide before being covered by the next. These ephemeral landscapes, in their captivating stillness and contemplation, conjure a sense of the ephemeral and other-worldly; a place between something and nothing. The line between the sea and the horizon is uncertain, marked only by subtle gradations of colour in misty pinks, whites and blues. The painterly photographs have a refreshing lightness; the salt air tangible on the skin. The subtle changes of light and colour create a sense of limitlessness as each moment reaches effortlessly into the next.

Using a 10 x 8-inch wooden Gandolfi plate camera, the artist produces negatives of great clarity. The process of making the photograph is slow, allowing the artist time to wait and soak up the fullness of each location. This process is one that allows a rich vision of the British landscape to appear. Cory Wright’s photographs are well-known for their size, often printed at two metres or more. 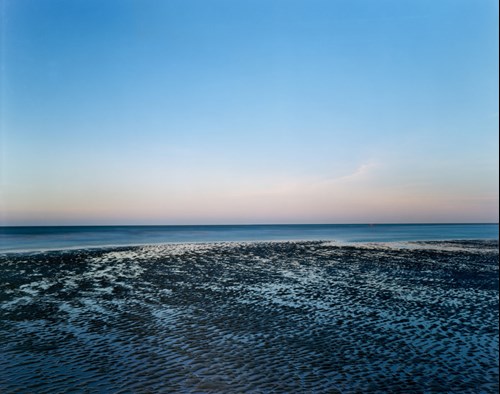 Cory Wright’s drawings follow from his photographs. Drawn from memory in ink and watercolour, they capture the essence of the locations he has immersed himself in. The gestural drawings, in their two-dimensional linearity are captivatingly immediate and precise, taking the viewer to the heart of Cory’s Wright’s vision.
Cory Wright has produced several photographic series based on landscapes of the British and Irish Isles. “I’ve always had a deep love of the landscape of the British Isles and I’ve loved taking pictures of it since I was 17.” Throughout his career, Cory Wright has recorded some of the most beautiful locations in the country. In 1997, he published his book Journey through the British Isles which was received with great acclaim and is now in its second edition. Cory Wright has collaborated with a number of writers including David Almond, Adam Nicolson, Ruth Padel, Lionel Shriver and Geoff Dyer, illuminating their Places in Mind. This project asked each writer for 350 words on a place important to them which Cory Wright also photographed.